My Trip to IKI

On the last Weekend, I got the chance to visit the island Iki, which is located in the north-west of Kyushu. I went there for two days with a friend from Germany, whom I met in Fukuoka. The possibility to go there was created thanks to SUiTO Fukuoka, the company at which I am doing an internship at the moment. They offered us a great prize for a two day trip and we had very little to do to organize an accommodation, mode of transportation, etc., so we could fully concentrate on thinking up a route, which would allow us to get the most out of the two days. We really wanted to visit the shrines, which there are a lot of scattered all over the island, as well as some of the beaches and of course the famous rock formation, Saru Iwa, the monkey rock. 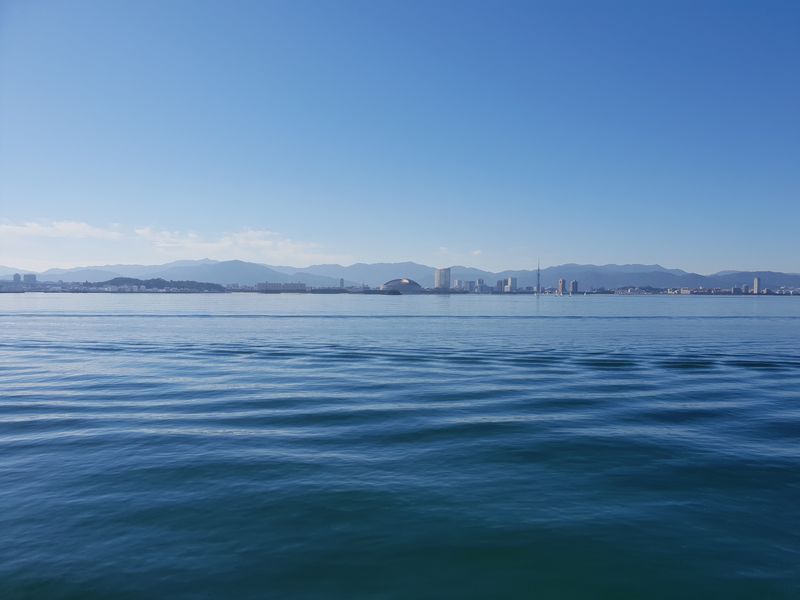 Fukuoka, as seen from the ferry.

We started our trip on Saturday morning, met up and went to the ferry port in Hakata to get our tickets. Luckily, the travel documents were very well prepared, so we just had to hand over a printed out coupon ad received our tickets. After a two-hour ferry trip, we arrived at the port of Gonoura on Iki island. We went to the tourist information counter and after presenting our travel documents, we received the rental bicycles, which we reserved in advance, to be able to take on a longer tour without tiring out too much. For that reason as well, we chose electric bicycles, which came with a charger, so we would be able to use them for 2 consecutive days.

The whole process of planning and reserving things beforehand was very easy, since we attended a workshop at SUiTO Fukuoka, to get information and inspiration for our trip and just had to fill out a form and write down if we wanted bikes, at what kind of accommodation and where we wanted to stay for the night, etc.. 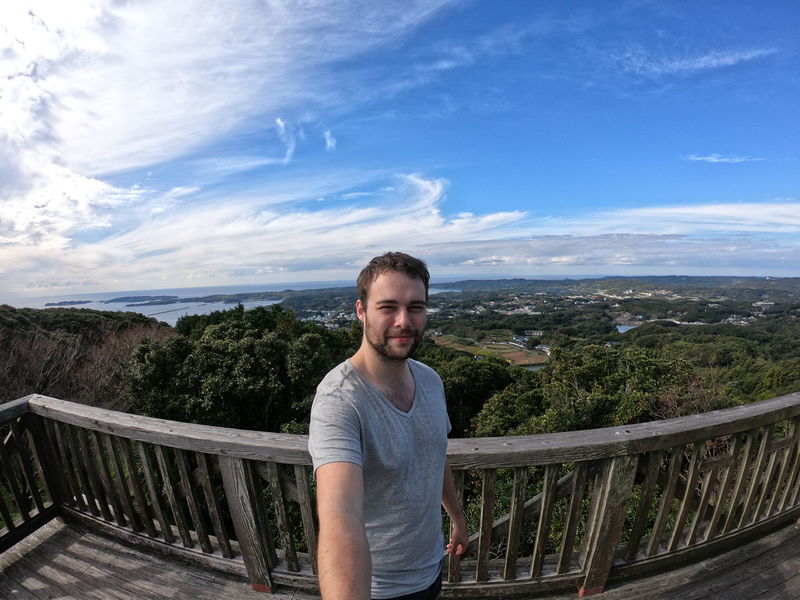 The View from the Takenotsuji Observation Spot

After getting a bit more information on the island and receiving our bicycles, we headed straight to the Takenotsuji observation spot, which is the highest point in Iki, at a height of 231 meters above sea level. The view from there was really stunning and gave a good impression about Iki itself, as we could see most cities and larger points of interest from there. So we took our lunch there and started to head for our next stop, Tsutsukihama Beach. Iki really has a lot of beautiful beaches and the water and flora are really different from the mainland, so it almost seemed like a tropical island. Tsutsukihama beach was no exceptions and was really beautiful, but as it would have been quite cold to go for a swim, we decided to postpone that to the next Iki-trip. We took the road along the coast and headed towards Kojima shrine, a shrine which is located on a small island which gets accessible via foot only when the tide is low and a small path reveals itself. On our way there, we came across a few other shrines and landscapes, so we missed the chance to go on the island by just a bit. But we could still see it from the shore. It is a very beautiful shrine and the small island, together with the tidal factor give off a mysterious impression. 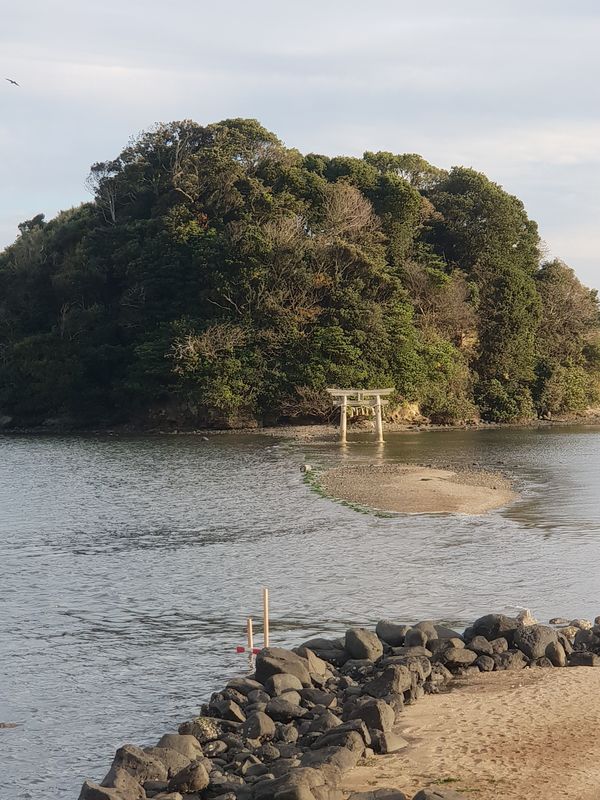 Kojima Shrine, just after the tide was rising

After that, we started heading in the direction of Katsumoto, the town, where we would be staying for the night. On our way there, we came across all kinds of things like rice fields, shrines and villages, which allowed us to get a better insight in how life works on Iki. Everything was very beautiful and we arrived safely at Katsumoto. We stayed the night in a guesthouse with dormitory-style sleeping rooms, but it was very comfortable and the personnel was very polite and and told us about some things to see in Katsumoto. We had dinner and went to sleep relatively early, because we had to get up early in the morning.

Sunday morning, we first went to the Katsumoto morning market, which is a festival-style open market, where one can experience all kinds of food and even different show-acts on a stage in the center. We watched the local Taiko group, as well as a dance team, both of which were very impressive. Afterwards, we headed towards the port Katsumoto, to take part in the Tatsunoshima Island Cruise. The captain of the cruise boat showed us the small island of Tatsunoshima, as well as the surrounding smaller Islets. It was really amazing, how the water and the rock formations looked. It was very different from the mainland and a very impressive piece of nature to see.

After finishing the island cruise, we took our bicycles and left Katsumoto, to head towards the famous monkey rock, Saru Iwa. On our way we tried and managed to drive along the coast, to see as much beaches and coastal landscape as possible. It was really beautiful and we arrived earlier than thought at Saru Iwa. The rock itself actually does look like a monkey, which is kind of fascinating already, but even more fascinating is the impact that had on the inhabitants of Iki. Everywhere you go, you will see the rock as a motive. 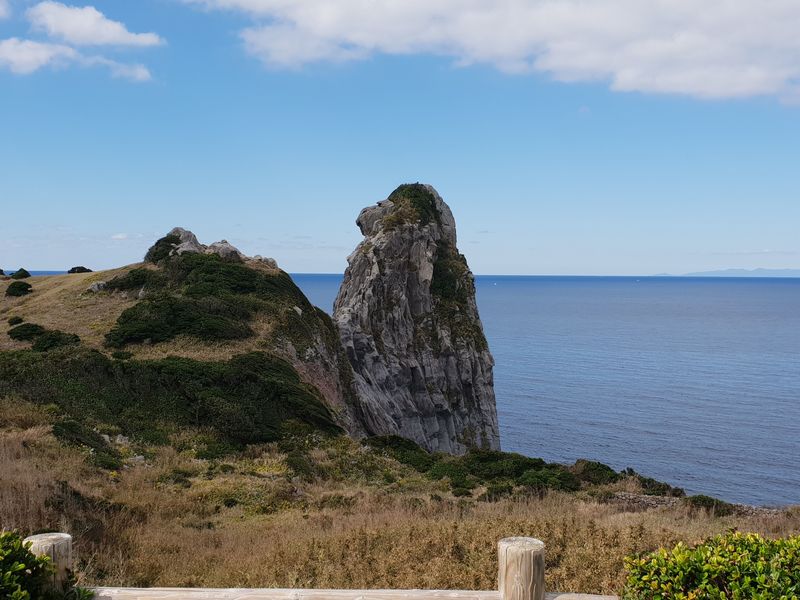 Saru Iwa, the monkey rock. The monkey-esque shape can be clearly seen.

After the monkey rock, we made our way back to Gonoura port, because we wanted to try sea urchin before we head back. We heard lots of good things about the sea urchin from Iki and managed to find a restaurant, which served it, even though it was off-season for sea urchin. The restaurant was very nice, with traditional décor and furniture. Sadly, both of us will not be adding sea urchin to our top ten list of food, but it was a worthwhile experience and maybe we will give it another chance, when it is in season.

With the sea urchin being our last stop, we returned the bicycles, got our ferry ticket back and boarded the ship. I got myself an Iki-fan-shirt in the ferry shop, to commemorate this lovely trip. In total, it was a great trip, with lots of experiences densely packed into two days. For the next trip, I will try to take it in summer, so I can experience a bit more of the season-dependent stuff. But nonetheless, I had lots of fun and would recommend anyone a visit to Iki Island.